Collective action as a catalyst for cultural changes

In this first blog post we will discuss about collective action as a catalyst for cultural changes. Casa di Alice has been the first step of our trip, a one-year journey throughout which we collected stories of collective action all around the world.

We have been mainly driven by the will to remind ourselves and inspire others who join us, that the world is full of innovative and inspiring stories that show how people come together by acting as a collective to succeed in meeting their territorial needs. We sought to find stories of how togetherness is conducive to and promotes social-economic cohesion and social justice. This is the case of this incredible story: “Casa di Alice” (Alice’s home) and the ‘Altri Orizzonti – Jerry Essan Masslo’  cooperative in Castel Volturno in Southern Italy.

There are lots of mistaken ideas that have crept into public opinion, and have influenced thinkers, economists and policy-makers about the potential and capacity of some organizations, especially cooperatives, to offer valuable opportunities of change to people and places. Starting after WWII, we witnessed many failing experiments of cooperatives that acted outside the guiding values and principles of the cooperative movement, and these historical experiences have left a whole host of negative preconceptions about the cooperative model.

Amongst them, we recall the conviction that people work together only moved by self-interest, sometimes also with a degree of uncertain legality. Among other misconceptions, there is the idea that cooperatives are representatives of the established power, that they can’t be truly democratic, that they are controlled by élites, and so they are unable to benefit the majority of their members, including the poorest and most marginalized, nor to contribute to major changes in society.

Before reading this blog post, here below, you can watch our coop story number 1:

In spite of this, the world is full of stories of collective resistance, community development and safeguarding of the commons, and cooperatives are often regarded as the main actors in these experiences. Many stories have been reported by cooperative members, by organizations that have collaborated with cooperatives, by social movements or by independent storytellers and yet, many of these experiences remain unknown, or certainly not as known as they should be.

So, here we are, playing our part in this huge collective effort of storytelling, embarking on a project that seeks to bring together diverse stories from around the world, in collaboration with the International Co-operative Alliance. We have done this through videos so stories can be told by the people themselves, as this one:

Collective action as a catalyst for cultural changes: The context of Castel Volturno

This area we are talking about is exactly the one that the TV-serie Gomorra has made famous all around the world. It is the place where Jerry Esslan Masslo, an immigrant from South Africa, was exploited in the tomato crops and  killed in 1989 (the event gave raise to one of the biggest anti-racist demonstrations in Italy, and brought about the first national law on immigration); it is where the priest Peppe Diana was killed in 1994 because of his rebellion against the Mafia; where in 2008 six innocent African immigrants were shot down in the “Strage di San Gennaro” – also known as the Castel Volturno massacre – and the murderers were convicted of murder with racial aggravating circumstances.

These are the lands where the Mafia organization known as “Nuova Camorra Organizzata” (New Organized Camorra) was led by the boss Cutolo and spread terror until the end of the 80s when they were replaced by another Mafia organization. Here, immigrants represent a half of the total population, and live essentially in conditions of slavery even today. This is also the area known as “Terra dei Fuochi” (Land of Fires) where the systematic burial of toxic waste along with numerous bonfires lit by organized criminals has had a devastating impact on the health of the local population, agriculture and on the whole local economy.

In contrast, this is also the area where a large group of people have come together to resist and keep fighting against criminal organizations, against racism and environmental devastation, despite the extreme difficulties they face. These people are the main authors of  a massive and revolutionary cultural change. The legendary singer Miriam Makeba understood all of this very well and on the 9th of November 2008 went to perform in the main square of Castel Volturno, giving her support to the groups against racism and Mafia. Unfortunately, she died the very same day, right after the concert. A monument is there in the same square in memory of her support to the community of Castel Volturno. 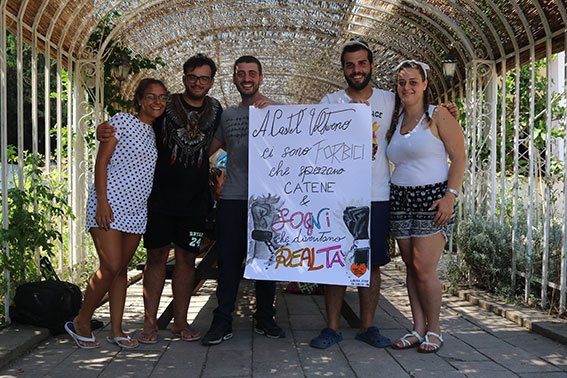 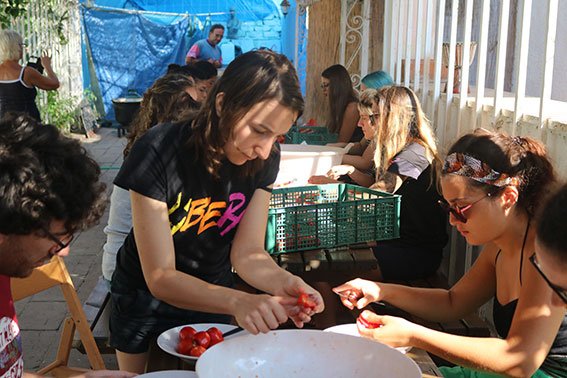 This social network composed of individuals, associations and social cooperatives, is now taking back the collective property and lands that belonged to the organized criminals. These properties are now being turned into places that promote social and economic inclusion, also thanks to the action of the Association “Libera” which brought laws upon the social use of assets that had been confiscated from the criminal organizations.

These people are proposing a new cultural model, before an economic and social. They are starting from the transformation of language, giving new meaning to words. The acronym NCO (as it was said before stood for “New Organized Camorra”) now no longer has a reference to the mafia.

It now stands for “Nuova Cooperazione Organizzata” (“New Organized Cooperation”), the name of a network of social cooperatives in the area of Caserta, which manage confiscated assets by carrying out projects of social economy. NCO now stands also for “Nuova Cucina Organizzata”  (“New Organized Kitchen”), a popular restaurant in the village of Casal di Principe. Someone should probably tell all this to the next author of a tourist guide book on the area of Caserta…

The project ‘Casa di Alice’ (Alice’s Home) was founded within this context of cultural transformation. It was established in a building confiscated from the boss Pupetta Maresca. This building is now the headquarters of the ‘Altri Orizzonti – Jerry Essan Masslo’ Cooperative. The cooperative was set up in 2011 by a group of young volunteers of the association ‘Jerry Essan Masslo’, created in 1989 when seven doctors and a social worker decided to act in response to the murder of Jerry Masslo, a  South African refugee, as explained at the beginning of this post.

Since then, the association has carried out projects of cultural integration and social and health assistance, in particular for migrants. ‘Alice’s Home’ initially was given to the association, and then, when the ‘Altri Orizzonti – Jerry Essan Masslo’ Cooperative was set up, it became the heart of the economic and social projects of the cooperative.

The projects have as a final aim one of concretely addressing the needs of a difficult area such as Castel Volturno. So, for instance,  “Made in Castel Volturno” – a project of social tailoring – came up, as a tangible result of how Italian and African tailors together can craft clothes and create an opportunity for decent work, dignity and intercultural exchange.

‘The cooperative is an heterogeneous and multiethnic enterprise, it creates work, integrates the different cultures in the area of Castel Volturno, and it promotes the culture of legality and solidarity’

In line with this approach, some of the members of the cooperative are now proponents of a new project for local development, named ‘Buona Terra’ (The Good Land) that will produce organic tomato sauce on uncontaminated lands confiscated from the Mafia. This is a project that aims to promote decent work, promote innovative collaboration among farmers, such as with the local visionary farmers, like Miriam and Giuseppe of the project ‘Orto Conviviale’ and throughout the whole value chain, including social cooperatives in processing activities and selling the final product to joint purchasing groups like DESBRI.

Lessons learnt from this social coop!

What can we bring out of the experience of ‘Casa di Alice’? Here is some food for thought:

We would like to conclude this post with a message that some of the cooperative members of ‘Casa di Alice’ left us with last August when we had the chance to spend a few days with them. It is a message which tells their story and may spread a message of hope for many other places…

Let’s then pick up the baton from Alice’s home cooperators and head off to the Toudarte Argan Oil Cooperative in Morocco!